A Celebration of John Keats 1819 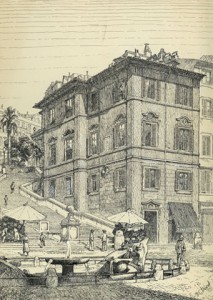 The year 1819 was the one in which John Keats wrote many of his best loved poems, beginning with ‘The Eve of St Agnes’ and ending with the ‘Ode to Autumn’. From his long narrative poem sequence, ‘Written in Water’, acclaimed British poet Andrew Mitchell will read the section which covers this highly creative time in Keats’s life. It is the only part of the poem which assumes Keats’s own voice and attempts to consider his thinking on life, love and poetry at that time.

The event will consist of three parts: an introduction to Keats in 1819; selected readings from the poems; a performance from Written in Water with illustrations and music.

Participation is included in the standard museum entrance ticket

Andrew Mitchell is a narrative poet with experience of incorporating music, dance and song into poetry performance. His current project, A Paradise of Exiles, is a sequence of poems based round the lives and work of the younger British Romantic Poets. He visits Rome this October to read from his long narrative, ‘Written in Water’, on the life, work and ideas of John Keats. This visit is to
celebrate the bicentenary of John Keats’s great poems written in 1819. He returns to Rome to mark the bicentenary of Keats’s death in 2021. This performance comes directly from The British Library in London. He is an Honorary Fellow in Creative Writing at the University of Leicester.